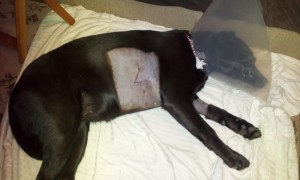 Maya, 2 weeks after being attacked by a Pit Bull

We had our vicious dog hearing today and the result went as well as could be expected. As the hearing and results are open to the public, I have no qualms about stating the results here. The hearing was comprised of 3 members; the chief of police, a representative of the RI SPCA and a 3rd member from a neighboring cities Dog Officer.

The hearing opened with the panel reading the rules and regulations of the hearing, as well as the text of the statute and potential requirements should the dog be labeled as vicious. Each side is then allowed time to present their case and a verdict returned afterwards.

At the end of testimony the panel then began to talk about the potential requirements and came back with a 3/0 ruling that this was a vicious, unprovoked attacked and that the dog was to be labeled as vicious. The panel also came back 3/0 on the following restrictions:

What is important about these requirements is that a failure to heed them will result in arrest of the owners and potential criminal charges filed. These restrictions are not optional for the dog owner.

The requirements that were declined by the panel at this time are:

– a requirement for a six sided (top, bottom and locking sides) enclosure for the dog when it is outside
– euthanizing the dog

We were not asking for the dog to be euthanized and are happy with the results of the hearing.

Unfortunately the pit bull owners weren’t completely truthful during the hearing and were trying to deflect the attack on Maya and myself saying that the pit bull did not come out and attack, but rather was sniffing around our dogs and then became scared and attacked.

Even with that false statement, the 3 member panel determined that even *if* that was the case, sniffing around another dog is not an act of provocation and does not justify the attack that happened on Maya.

The neighbors stomped out of the hearing as the panel was stating that the hearing simply was to determine whether the dog should be labeled as vicious and to retrieve the funds we have spent on injuries, surgeries, etc that it would have to be a civil matter or “we could just talk to the neighbors” – at which time they proceeded to walk out of the room mumbling derogatory comments towards/about us.

So onto the next steps … it’s too bad that it has to be this way and that they are acting with hostility and contempt towards us.