Take that Nissan Titan V8 – VW Tiguan to the Rescue!

We got a little snow from the storm this weekend and our neighbor, the dairy farmer, came up with his huge tractor and 8 foot snow thrower to get us out. I also asked him to cut our “circular” driveway that we use that goes around our garden. It’s not really a driveway – it’s just part of the yard/lawn. But with the motorhome in the driveway and 2 cars, it get a little tight to turn around, so being able to just drive around makes it easier.

Our daughter came up for breakfast today and to borrow our roof rake. She came up in her boyfriends 4WD, Nissan Titan V8. Rather that back down our 750′ driveway, I moved the Tiguan so that she could use the “circular” part. It is a downhill drop from the driveway a little and as she was going down, she slid a little off to the side and as she was driving slowly – trying to be careful – the truck got wedged into the snow.

After a few minutes of trying to rock it out, we realized she wasn’t getting out without some help. We spent a few minutes trying to clear the tires and up under the chassis – still no luck.

I decided it was time to take out the big guns. Went up to my storage shed, pulled out a 10,000lb recovery strap, backed the Tiguan up to the Titan, hooked the strap up to the pull hook on the Titan and the hitch on the Tiguan and with no effort, pulled that truck right out.

I couldn’t catch it on video as I was driving the Tiguan, but wouldn’t let her leave without taking a few photos 🙂

Categories: Connecticut, Life On The Farm | Leave a comment

A little snow from Nemo!

Nemo, the Blizzard of 2013 brought us a little snow here in the hills of Southbury, CT. By the end of the storm, we ended up with nearly 2 feet of snow. Brody and Maya had a ball playing in the snow today, me I got to spend the day clearing the driveway, parts of the deck on the house as well as the roof of the motorhome.

There was way too much snow for hand clearing, and as our driveway is uphill and the snow was relatively heavy, it wasn’t a job for a snow plow either. Luckily we have a great neighbor – Ben Platt. He runs a 180 acre dairy farm and has lots of cool machinery – including an 8 foot snowthrower that attaches to one of his big tractors. This is the way to clear snow!

The top of the motorhome had more than a foot of snow on it, and I really wanted to get it cleared off before it started the melt/freeze/melt/freeze cycle. I started clearing off the roof of the motorhome with a roof rake, but with all the obstructions (vent pipes, a/c units, vents, etc) that was not an easy task so I climbed up on top – with a healthy dose of fear and respect for a slippery roof. 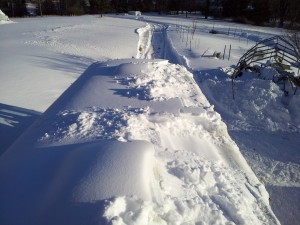 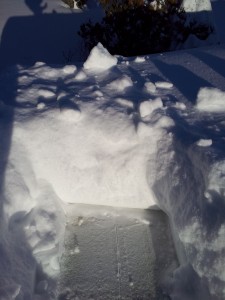 Categories: Connecticut, Life On The Farm, News and Updates | Leave a comment

It seems the host for JoeGibbsRacing.com is having problems handling the traffic around the announcement showing off Elliott Sadler’s 2013 Nationwide Series Toyota.

For those of you that can’t see the new 2013 car, here it is … Looks nice! and I like the Pink shoes keeping us all reminded about Breast Cancer

Go after that NNS Trophy this year Elliott, you can do it! 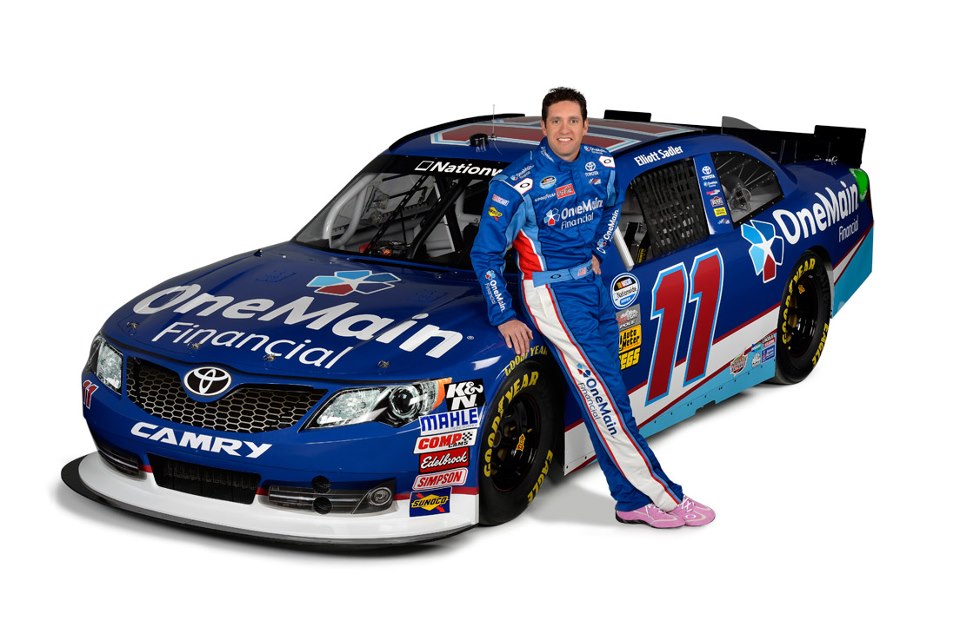 Once again we’re packing up the RV to head out. This isn’t a vacation trip, rather a trip from our rental property in RI back to our home in CT. We’ve been hard at work the last couple of months renovating the rental property in RI, and it’s coming along great. We have one item left which is the installation of the new Sheet Vinyl Flooring throughout the 1st floor, and then we are DONE and ready to rent. You can see the house for rent online at http://www.Rent115ClintonAve.com.

We’ve decided to head back to CT for a few days, maybe a week, to spend the holidays with our family – so once again we’re packing up the motorhome. Along with this trip we’re emptying out the RI house even more, taking more items back with us. Tonight we’re taking most of the kitchen items, along with the food, etc that we’ve been living with here.

And again, I continue to be impressed/amazed with how much kitchen storage we have in our 32′ National RV. The kitchen is one of the big items that sold us on this model after looking at so many other motorhomes in this size range. The U Shaped layout, along with the immense amount of cabinets, storage space, drawers and more is just GREAT. Not only have we put back all the “regular” RV kitchen items that we typically travel with, but we’ve brought most of the kitchen items from the house and still have room to spare.

Oh well enough chat… back to packing up

Tonight while I was dumping the tanks, I decided to fire up the hot water heater. I was going to leave the slinky attached, take a shower and then dump the grey tank again … just to give it a few more gallons of “cleaner” water.  I came inside the motorhome to click on the water heater and it didn’t sound quite right. Typically you’ll hear the roar of the flame and while it was roaring, the pitch was off.

I went outside to pull the panel down and not only could I hear the electronic ignition clicking on, and on, there was black soot on the exhaust cover and the side of the motorhome. If that wasn’t bad enough, the flame wasn’t blue and was coming right up into the vent stack. Immediately I knew something was wrong and went inside to shut it down.

The first thing I am thinking is bugs, spiders or mud daubers somewhere in the propane tube. So I grabbed a small 1/4 socket and ratchet and took the burner assembly tube off. Sure enough, a small spider had built a web inside the tube and was blocking the clean flow of fuel. This is a bad thing because not only doesn’t the propane burn properly and create soot, but it also creates carbon monoxide.

It took all of a couple of minutes to clean out the tube and remove the unwanted guest, and a few more to put everything back in place. Once reassembled I fired up the water heater again, and wala! we have a nice blue flame, with the “proper” roaring, no soot and no flame in the exhaust hood.

I’m glad I was outside dumping the tanks when this happened. I could very well have been in the coach and not known.

Add another item to the checklist …

I took the motorhome out today to get some fuel. We’re at our place in RI and will likely see some of the effects of Hurricane Sandy. I wanted to make sure that we had enough fuel to run the genny for a few days if we need to. 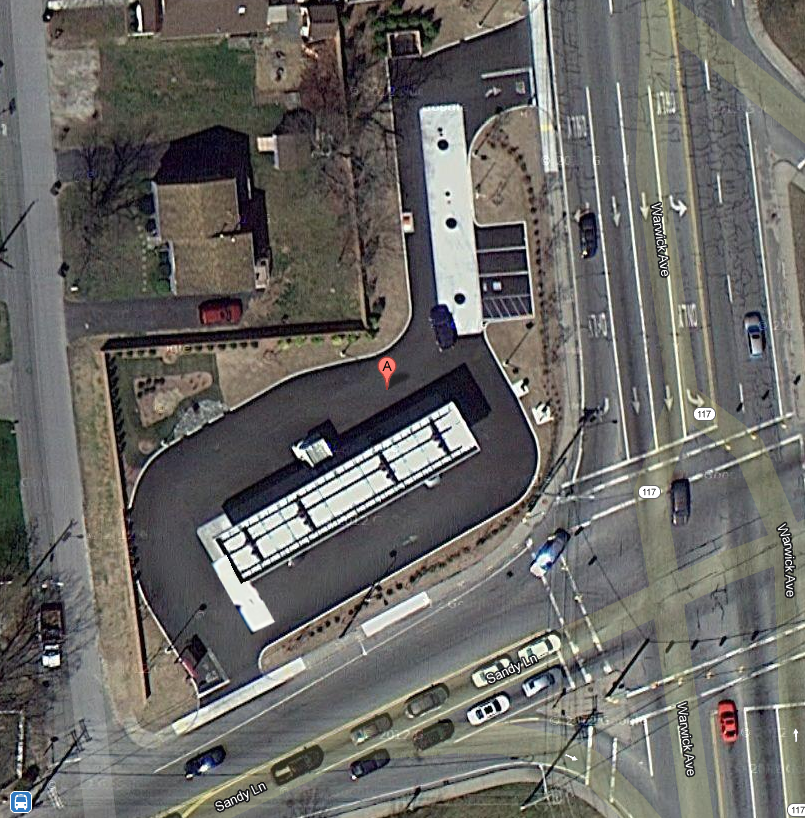 Yes I superimposed the RV into a satellite view of the gas station. yes, It’s a little tight at the front while I am fueling up, but I don’t block the front and back and do my best to be in and out as quickly as possible

I use one gas station in particular in town here .. we earn gas points at the Stop&Shop which translates to money off at the pump. As I was pulling up to the station it was pretty packed with cars constantly going in and out of the pumps.

I kept my cool and didn’t lean on the horn and she just kind of looked at me when she got out of her car. So while she went up to prepay for fuel, I just creeped right up to her rear bumper – there was no way anyone but Twiggy would be able to walk between her SUV and the motorhome.

After she pulls out I start the motorhome again, put it into drive and then get 2 other cars trying to squeeze between the curbside of the motorhome and the edge of the gas station. Now I’m blocked in again without enough room to swing out a little …grrr. They finally back up and go the other way.

A little while, and 35 gallons later, it’s time to pull out. To safely get away from the pump I have to back up and swing the motorhome so that I don’t know the pumps on the swing out. Of course people can see me creeping slowly backwards, but do you think they would stop – of course not – they can’t wait a few seconds for me to backup and just have to drive behind me *right now*.

Finally I’m positioned in the exit and yes, I am taking up most of it and am situated to the left side so that I can make a clean right hand turn into the single lane and BOOM a van comes blasting from the opposite direction that I am heading towards to squeeze on my left side and jumps the curb just to get in. He was only inches from hitting the front drivers side of the motorhome.

Geez … I mean it’s a hurricane yes, but it’s not going to be here in RI for a couple of days and the track might even change. Total craziness at the pumps today …

Some fun videos with our 2 Labs

Here are a few videos of our “4 legged” kids, our 2 Labs … having some fun at home on the farm.

Categories: Connecticut, Life On The Farm, Travel | Leave a comment 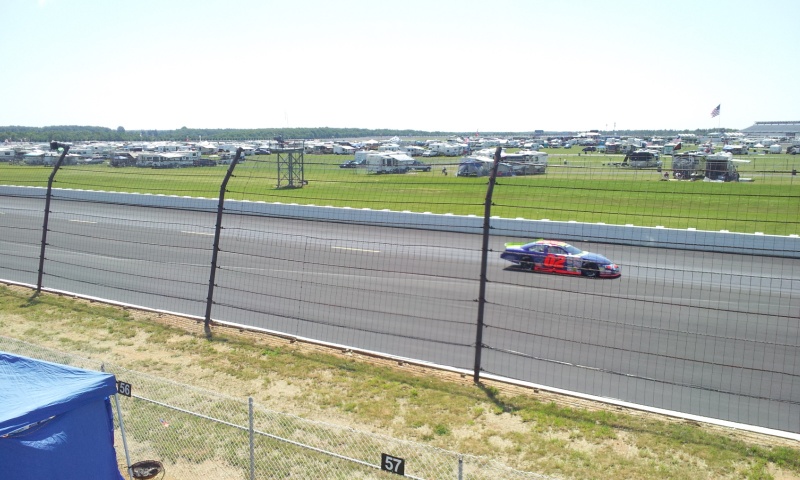 We woke up today to the sounds of roaring engines .. what a GREAT alarm clock! After getting in at about 1:30am, we got setup, had some dinner a couple of drinks and then dozed off.
Today’s events include practice for both the ARCA racing and the NASCAR Sprint Cup Race. Today should be a fun day and we have an excellent RV Camping Spot.

Here’s a quick video from the top of the motorhome 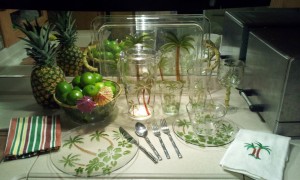 We’re all packed and ready to head out to Pocono for the NASCAR race weekend. While shopping for food and drinks for our weekend trip, Maureen found some great Palm Tree Themed Accessories to add to our collection for the RV. For those that don’t know, our motorhome is a National RV Sea Breeze and the NRV logo includes Palm Trees. It keeps with that sunny, island, relaxed outlook!

It’s about time to clean up, catch up a bit on the rest of my day and head off to bed.

Stay tuned throughout the weekend for updates, photos, videos and more.

Trackside Camping at Pocono here we come … shot a short video of our final pre-trip inspection today.
We still have to finish packing up and cleaning up a bit .. another couple of hours. Maureen is out at the grocery and liquor stores getting supplies for the weekend.

Last call if you want to come join us Trackside!