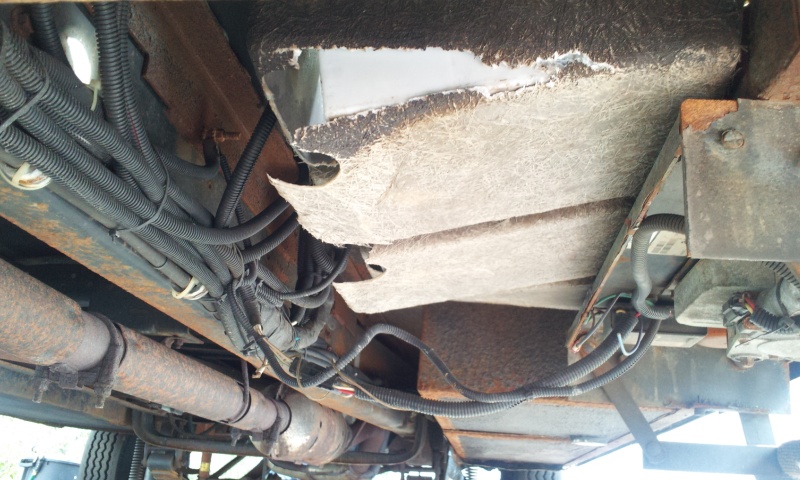 I was taking a look at our steps the other day – they have a bit of play in them sometimes when you step on them. I think that it’s because they haven’t extended fully before someone steps on them – but anyway, I bent over to take a look at the mechanism and was horrified at what I saw underneath!

The back corner of the fiberglass battery box had broken away and was sheared nearly across the whole back of the box. The house batteries were tilted down and had I not emergency/temporarily addressed this, I am pretty sure that we would have been driving down the road wondering why we lost power all of the sudden – because the batteries could very well have fallen out!

We’ve been on the road since early September and I know that the batteries were not like that when we left, or at other places in our travels. I’m not sure when this damage happened, but it must have been over the past couple of weeks.

I’m very glad that we were visiting with some family as I had access to a few things/tools that I would normally not have access to while travelling. I have the bottom of the box strapped up now, and we did do about 150 miles of travel yesterday and it all seems ok for the immediate time – but now I need to come up with a better, permanent fix.

While I was under there devising and implementing the fix, I noticed that the screws that hold the molded battery box to the front door frame all “missed” their mark when they were installed 5/6 years ago. The installer/builder at NRV got the screws through the outer door baseplate, but when they “hit” the molded battery box they all shifted downward, so they did not make any contact with the battery box – that totally explains why the steps had a little shimmy in them when you stepped on them.

Regrettably this just another one of the poor workmanship areas that I have found the longer we own this coach and do work/maintenance on it. I still do feel that the NRV coach as a whole is nice, but I’m finding quite a few areas where things just weren’t checked or put together quite right. The squeaky dash drove me crazy when we first got the coach and I spent an afternoon taking the entire dash out to find the squeaks that were resolved with only a few properly placed and installed screws and bolts.

For this temporary fix I drilled 2 new holes in the box above the batteries, used a piece of wood underneath the box and strapped it all the way around. I also added a couple of small metal straps to the board *just* in case the strap loosens up – so that the board doesn’t become another flying projectile down the road.

While fiberglass is relatively strong, I am really surprised that the entire battery box is fiberglass with no other means of added support. Poor design in my mind.

Off to the drawing board for a permanent fix