We arrived at the KOA Niagara Falls, NY last night. We got here at about 8:02pm and the office was closed, but the staff inside was gracious enough to open up and give us a map so that we could get to our campsite. After our mistake at the last stop, it was nice to have a map marked out with our path to our site.

First impressions of the campground were so-so, as the 50Amp pull through area doesn’t offer much shade – it should in a few years when the young trees on the sites mature, and the sites are a bit narrow. I do wish that we had a spot with more grass for the dogs, and we’ll keep that in mind as we make future reservations. In any event, we got setup just fine.

We stopped at Camping World along the way for a few more things that we needed for our travelling home. Among other things, we picked up a nice, small Weber portable grill. The reviews on this grill seem to be very positive from people that travel with it a lot. I also picked up a Digital TV Antenna Adaptor for the top of our Wingman Antenna … and I was totally surprised at how well it works. Before adding the DTV piece (only $22 mind you), we had no broadcast TV. It took about 10 minutes to unpack it, climb up on the roof, install it and test it. Immediately we had about 1/2 dozen over-the-air channels without even ‘tuning it”. I’ve been looking at the Jack Digital Antenna as a replacement for the Wingman. I like it because it stays up and can be used for the passengers while in transit … but we’ll run this one for a while and see how it is. I’d really like to get an in-motion satellite – but that’s buried somewhere in the wish list.

After getting all setup and eating dinner, we took the dogs out for a walk around the campground. After walking around, we determined it’s a nicer location that initial impressions gave. The motorhome lot leaves a bit to be desired, but the rest of the campground is pretty nice. There are some nice tent sites, as well as patio sites – but these were all full up. I can see why, they are nice and in a nice section in the campground with a lot of mature trees. 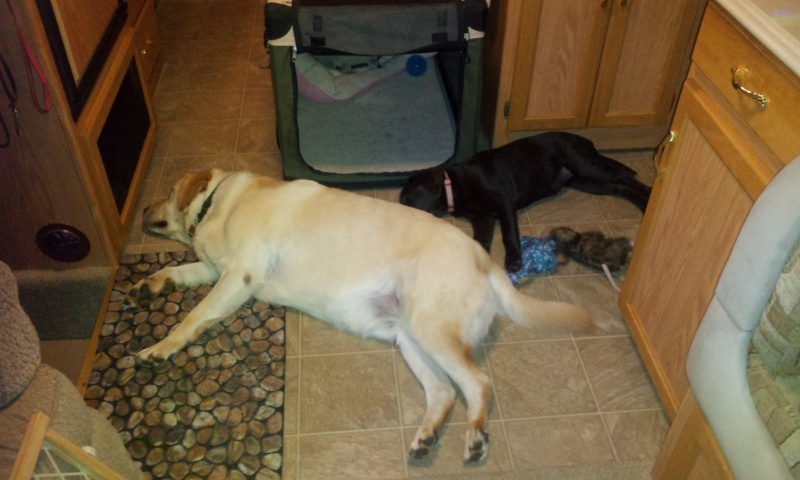 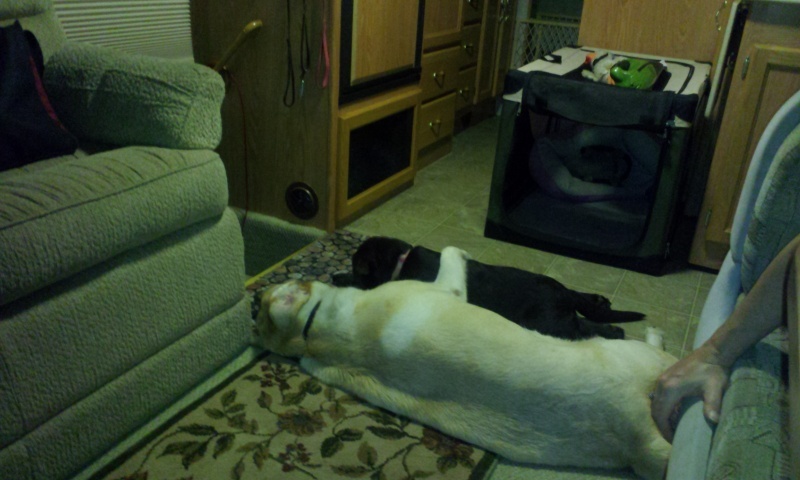 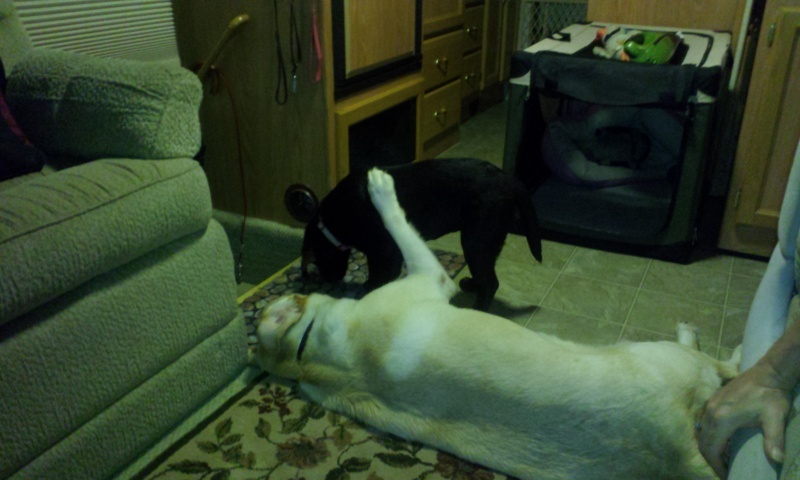 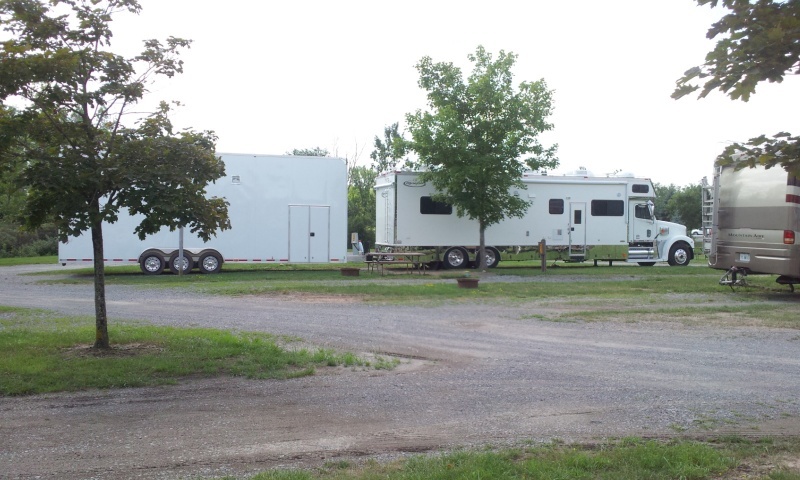 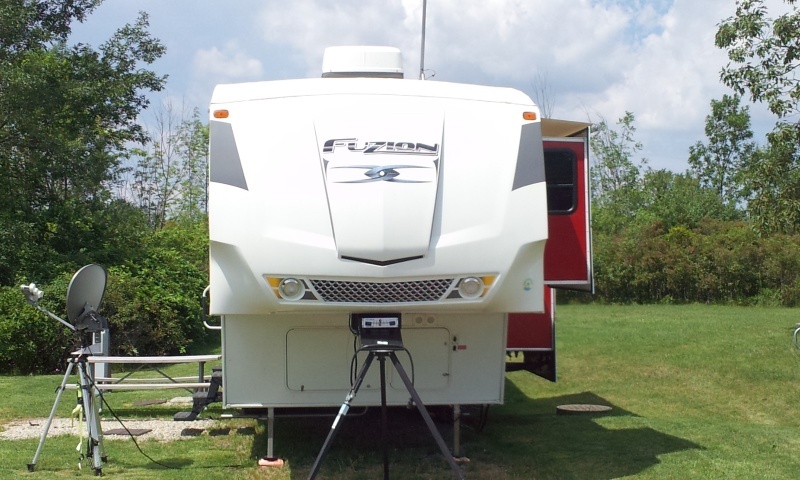 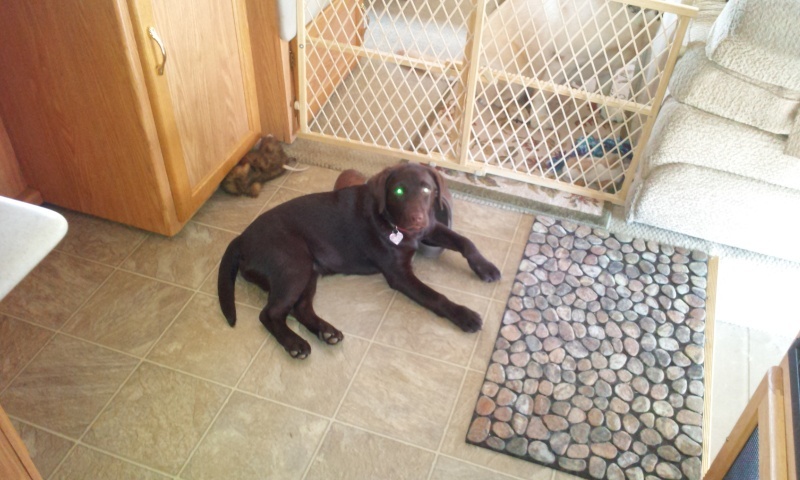 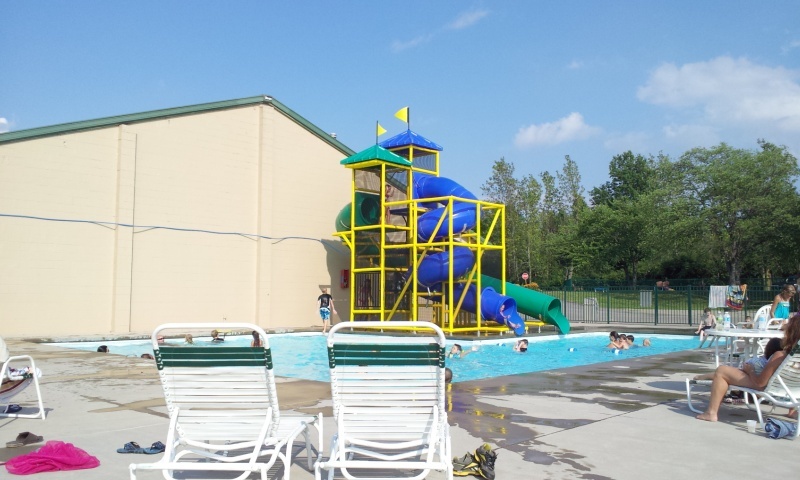 The campground also has these really cool cabins setup as small neighborhoods around the campground. Some of them are bunched together in wooded areas, some line up along with pool that has the waterslides, and others are along the stocked fishing pond. If you’re not travelling in a motorhome or camper, these would be a great escape, especially if you have kids. These would have been a bit hit with our kids when we used to tent camp. 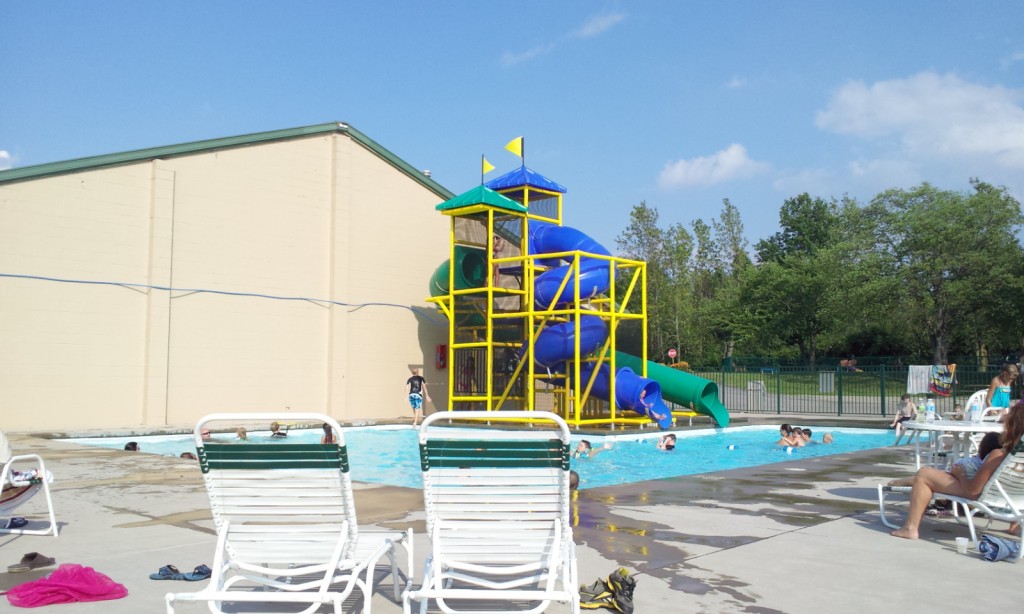 We got a great night’s sleep – even though we’re 2 rows from the end of the campground where it borders I-190, and all of our neighbors moved out in the morning. We didn’t hear a thing and were able to catch some good zzzz’s until nearly 11am – the puppies got nice and tired after their walk last night. Well rested after a good nights sleep, we decided to spend the day at the campground – with plans to venture out to the Falls and nearby areas tomorrow and later in the week. So we took some more walks, spent an hour or so in the pool, and yes I did go down the water slides with the kids.

Tomorrow, if the weather is as nice and hot as it was today, we’re going to get some tickets for Martin’s Fantasy Island. It’s a small amusement and water park that is right next to the KOA, and we can get discounted tickets at $19.95 per person for a day of fun. Plus the park has a train stop and private entrance right in the KOA where we can enter, leave and re-enter. Sounds like an afternoon of fun in the waterpark, come back walk the puppies, get dried off and then go ride the roller coaster and rides until they close.

Almost time for dinner … time to fire up the Weber!